skip to main | skip to sidebar

Sympathetic or not about Greenpeace's protest at Svea a couple weeks ago, this is pretty amusing.

First, this excerpt from an article last week:

"Fundraisers say they lost 20,000 kroner to help impoverished women when Svalbard's governor was forced to cancel a day washing cars so he could deal with the Greenpeace protest at Svea...Anne Lise Klungseth Sandvik, chairwoman for the local CARE campaign, sent an e-mail to Greenpeace asking for the 20,000 kroner...Truls Gulowsen, chairman of Greenpeace Norway, told the newspaper he's sympathetic for the lost fundraising and will provide the number of the telethon to those involved in the protest, 'but to force someone to pay is to go too far.' He said the governor, if committed to the event, can reschedule it for another day."

And this, courtesy of Svalbardposten, is at the top left of the Icepeople page today:

"Greenpeace has been fined 20,000 kroner after customs agents in Tromsø found 1,250 cans of beer aboard the Arctic Sunrise a few days after the group staged a daylong blockade at the Svea coal mine. 'We had a routine inspection when the ship arrived in Tromsø and found there was 627 liters of beer too much on board in relation to what was declared,' said Atle Joakimsen, regional customs director for northern Norway. The matter was reported to police who issued the fine, which was paid on the spot. The Arctic Sunrise was about to depart for Amsterdam last Thursday when the customs inspection occurred. 'It was embarrassing and very annoying after a four-month-long expedition to Greenland and Svalbard,' said Truls Gulowsen, head of Greenpeace Norway."
Posted by Iceman at 3:34 AM 1 comment:

Why do people think doing things that make them look stupid is going to win coverts on serious policy issues?

I can't count the number of times I've seen this. They'll bring traffic in the busiest part of a major city to halt by demonstrating on the road for hours. What do you think those hundreds of thousands of proles stuck in gridlock (not to mention the millions seeing it on the news) are talking about that night? The cause of these folks, or how angry they are at these idiots?

They throw pies at world leaders. I admit it's a great photo, but I haven't got the slightest idea what their cause is.

Greenpeace is at it again a week after blockading the coal mine at Svea for a day, this time scaling the roof of Parliament and getting arrested in droves. OK, I and probably most other at least get their issue in this case: Climate change is bad. But among the leaders and citizens who aren't convinced, are demonstrations like this and stripping naked by the hundred in vineyards more likely to advance serious debate or generate "hey, Martha, look at what those whacky Greenies did today" comments?

Sure, it's a great way to get media coverage. But how many serious wonks at the Copenhagen climate summit are going to be want to be seen meeting with these folks?

On the other hand, with a lot of people already making noise about whatever coming out of the summit likely falling well short of usefulness, maybe having fun and firing up your base of contributors isn't a bad thing.
Posted by Iceman at 5:03 AM No comments:

What's so hard about making a decent polar movie?

"Whiteout," a big-budget and highly hyped movie about Antarctica, is arriving in theaters to some of the worst reviews ever. It has an 8 percent rating at Rotten Tomatoes as I write this. That makes "Star Wars Episode I" look like "Gone With The Wind."

I was going to go on a tirade about how this is all too common, but instead I'll just make a few rental recommendations : "The Fast Runner," "Krasnaya Palatka" ("The Red Tent") and - sorry a sentimental favorite - "Never Cry Wolf." Or any account about Shackleton that isn't docudrama (one of those aired a few years ago and it was excruciating, sort of like "Titanic" forgetting the real drama had to do with the boat).
Posted by Iceman at 3:27 AM No comments:

That's the banner headline at the top of Svalbardposten's Web site if you use Google Translate (with real letters replacing the asterisks, of course). It's also why one of the first changes made to the Icepeople site was disabling the Google Translate link to Svalbardposten's articles. Editor Birger Amundsen was concerned - rightly so - about it making his paper look silly or worse.

Running lists of mistranslations can be fun, in sort of a Chinese-menu-into-English way, and I'll do so from time to time. But errors like this are also why I'll post warnings about what you read when links to other foreign sites are posted. I do it so people can decipher general meanings from articles - and sometimes they're so garbled I don't bother - but to expect more is lunacy.

Interestingly, the title bar for that particular page says the fire was "banged" by the boys. The original Norwegian word is "påsatt," which according to my dictionary means "incendiary" or "intentional." I've looked up various crude forms of "copulate" and nothing comes close to "påsatt."

But, hey, it puts me one step closer to being able to swear effectively in the language of my new homeland. So it wasn't a total loss.
Posted by Iceman at 3:03 AM No comments:

It's not Obama visits Ben's Chili Bowl, but...

Small-town charm and lack of pretense are, of course, among the many great things about Longyearbyen. I just wrapped up an hour-long "exit interview" with Svalbard Gov. Per Sefland, who is departing Sept. 15, and headed over to my usual writing spot at Fruene. Turns out we both made a beeline for the coffee shop, since he arrived seconds afterward (he's a fan of the fried egg and bacon sandwiches, which are probably the most popular food item there).

Ever the annoying journalist, I obviously had to wedge in another informal question, following up on his earlier remark about more international delegations coming here by asking who's the most interesting dignitary he's met. But, like asking an athlete about his toughest opponent, the governor's well-schooled in wry diplomacy ("I think I'd better not say.").

It also seems the machine was having some kind of trouble reading his credit card. I can just see that scene with Obama: FOX News and the wingnuts claiming he' s a Kenyan Muslim leading a Nazi-like indoctrination of kids by urging them to stay in school would have made it a scandal for months.

He got the sandwich to go. I'm pretty sure that was his plan all along.
Posted by Iceman at 2:42 AM No comments: 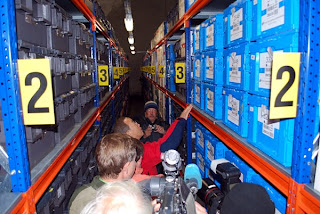 Working on a couple of articles about U.N. Secretary General Ban Ki-moon's trip to Svalbard that should be posted shortly, but a few quick impressions that may or may not make it into the "real" stories:

- The biggest surprise wasn't anything Ban said or did, but rather what he didn't get to say. There was time for three questions from the public at the end of a public forum Wednesday at The University Centre In Svalbard. In a room packed mostly with students and scientists that Ban had just called the future leaders of the world due to a unique situation where science is driving much of the important issues on the global agenda, only one question was asked. It was literally a Ferris Bueller moment with the moderator saying "Anyone...don't be shy." Silence. Unbelievable.

- The best question that did come from that meeting was at the end from one of the four panelists (including Ban). Sheila Watt-Cloutier, a prominent Canadian Inuit activist who delivered a wallop of a five-minute speech about the hardships of her people and unacceptable compromises being reached, used her closing statement to basically get herself invited to the U.N. General Assembly meeting next month in New York. "Not to put you on the spot Mr. Secretary-General, but it would be a wonder for the Arctic people to have a voice as well." Afterward, she said, "he just said 'I'm on it,'" meaning he's doing what he can to get her an invite. Safe to say that if she makes it to New York that, even in that distinguished crowd, her voice is going to be heard.

- The progression of first-hand observations of Ban from the entrance of the Svalbard Global Seed Vault to the -16C storage facility 140 meters inside the mountain: "It's cold" (just inside the door to the outer world); "This is all frost? Oy! Hold your breath." (touching the frost-covered door at the entrance to the storage room); "It's very cold" (waiting to get out of the room after perhaps a five-minute look at his country's deposit of seeds); "If you have any questions, I have to go out" (to the press pack as everybody finally escaped the room).

- The second-biggest surprise? Turns out this is only Svalbard Gov. Per Sefland's first trip into the seed vault since it opened.
Posted by Iceman at 5:08 AM No comments:

Those of you patient enough to keep looking here for the Northern Traveling Film Festival diaries, be patient just a bit longer.

I had to switch Web editing programs and the new one is a bit of adjustment. Working with all the photos in particular took some doing, but they got done last night and now it's just a matter of pairing them with the articles.

They're mostly done. Honest.
Posted by Iceman at 11:10 PM No comments:

Iceman
I'm a longtime journalist who's spent the past several years globetrotting as a professional transient and found these polar islands among the most fascinating places on Earth. From scientific research critical to Earth's future to mid-winter music festivals to a seed vault meant to replant the plant after Armageddon, life is isolated but never dull.